After a busy couple of hours sitting on the screened-in porch, it was time for our massage.  We had been a little nervous of whether Cindy and Cheryl would still be there, as we'd seen a lot of new faces.  But they both came around the corner together to greet us in the waiting room, and we got nicely caught up.  Apparently, when they saw it was us booking in, they cleared the rest of their schedules to make sure it was the two of them with us for all our appointments.  Yay!

We splurged and went for Eucalyptus oil (which had us stinkin' purty the rest of the day), and settled in for an hour of bliss.  Despite our RMT appointment last week, they still had lots to work on!  We were "ordered" back to our room for lots of water and a nap, so spent the rest of the afternoon alternately reading and snoozing (while drinking copious amounts of water).

Mid-way through the afternoon, we felt a bit peckish, so dug in to some of the salads we brought – in order to use up our veggies before we left, Alyssa had made a creamy cucumber and dill (and baby tomato) salad, and a kohlrabi-apple-carrot slaw.  They both hit the spot, without filling us up too much for dinner.

Opting for a change of scene, we then took our books to the screened-in porch.  The Honey Brown was finished (apparently we'd had the last ones the day before!), so we each had the Muskoka Cream Ale, which is also mighty tasty, especially on a hot day! 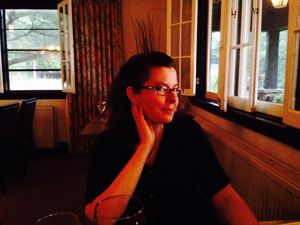 Shelby was our waiter, who we also remembered from the dining room last year (and she remembered us – hopefully for good reasons!). 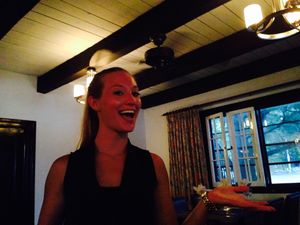 It was Don's turn to choose the wine, and he picked a Shiraz from Australia called Baan.  We don't tend to have much luck with Australian wines, but trusted Sir Sam's, and we're glad we did, because it was nice and rich and delicious. 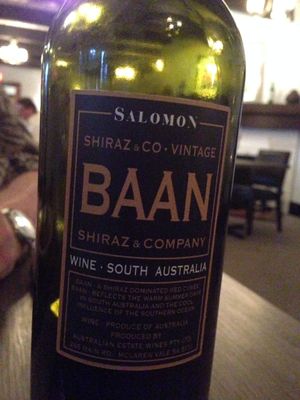 Is the bottle half full or... oh crap, only a quarter full.

Appetizers were a Mushroom & Sweet Pepper Strudel for Alyssa, with mixed greens on the side – absolutely delicious!  Don went for the Roasted Beet, Apple & Walnut Salad, with warm goat cheese and spiced carrot puree with mixed greens, which was very rich and flavourful.  Against the norm, Alyssa had managed to scarf down her whole appetizer before Don!

For mains, Don – who is now a duck addict, apparently! – went for the Pan Seared Muscovy Duck with Star Anise and Blueberry Compote.  It was perfectly cooked, and the sauce was beautiful, with a nice selection of potatoes and roast vegetables on the side. 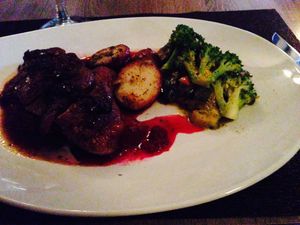 Alyssa had the Butternut Squash Ravioli with grilled vegetables and a pesto sauce.  The ravioli was nice and light, so Alyssa was also able to hoover her entire main course, and even finished this before Don as well!  (All this relaxing works up a girl's appetite...) 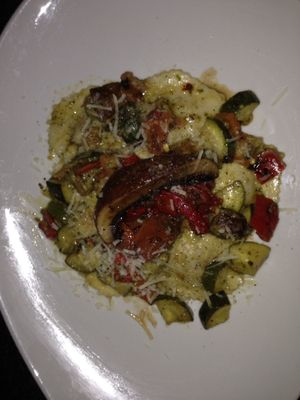 After dinner, we went to the bar, in order to entertain Adam (the bartender), Alisha (waiter, who was hanging out after her shift) and John (one of the chefs, also hanging out after his shift) with our awesome pool prowess.  With another Muskoka Cream Ale for Alyssa, and some Rye & Soda for Don.  Don won the first game nicely.  Then lost the second.  And then Alyssa lost the third.  (We swear, there's a magnet on the 8-ball!).  Despite the air conditioning, it was actually much hotter in the bar, so we went for a quick bit of air out front, and then up to our room for the night.

Sit down, because this next bit is going to psych out anyone who knows us:  We got up early and made it down to breakfast for 9am this morning!

Aly was our waiter again, and we had a nice visit with the owner, Ryan.  Don had the omelette with mushrooms, red peppers and mixed cheeses – with peameal on the side, of course.  Alyssa went for scrambled eggs.  We were both tempted by the blueberry waffles, but our sweet teeth ain't what they used to be!

Besides, we're about to head out and have lunch with our friend G in Haliburton, so needed to save room!  It's looking like a bit of a drizzly day today, with thunder-bumpers predicted for this afternoon.  So a good day to head in to town – nice planning, eh?

Have a Happy Tuesday, everyone!