So, where were we... ah yes, the disappointment that we couldn't do a surprise lunch with Chris and Gordo yesterday.  So we got all radical and went for a hike.  Yes.  Exercise.  It was quite a pleasant day for it, and not too buggy – other than one persistent deerfly who thought he was auditioning for "Jaws" with all the circling.  We also saw a cute little cottage for sale, that looked quite adorable on the outside – stone structure, nice red roof, lots of flowers, etc. So we took a picture of the MLS number, and when we got back, went for a little snoop.  Holy Mackinoli!!!  Almost the same price as our house, and nowhere near the size.  Nevermind.  (We weren't seriously looking, anyhow, but it's always fun to see what's out there.)  We're plenty happy where we are, and with an annual week away.

After our hike, Alyssa finally managed to convince Don to join her in the water spa – yahoo!  We grabbed our bathing suits and went for a swim, then did the circuit of massage jets, and another float, before we looked like prunes.  Happy prunes, but prunes nonetheless.  Then it was time for a nice, brisk nap.  ?  But not before we ate the last of our chocolate-covered strawberries!

Feeling rejuvenated (yet still lazy), we headed to the patio with books and beer.  And then it was time for the return of the revenge of the pool championship!!!  (There might have been a second beer consumed during the game.)  Alyssa's starting to get better at this game, and began talking about getting a pool table for the basement, so she could practise more... watch out, world.  (Erm... don't worry, world.)  There were about eight pretty tight games between us.  Don still won more of them, but Alyssa got some mighty nice shots in, so... there might be something to this whole "practise" thing (sshh, don't tell her students!).  Of course, she also managed to "break" twice with the white ball going directly in to the pocket.  And one spectacular "break" in which she sunk both the white ball and the eight ball, but we're going to just pretend that didn't happen, OK?

With all that athletic vigour in the day, we were actually kind of sleepy by the time dinner came around.  But we persevered, as we'd worked up an appetite!  Aly sat us, but Deb was our waiter, for the first time this trip (although we've seen her the last few years, of course).  It was Alyssa's turn to pick the wine, and she went with another "old familiar" from years-gone-by, the Boom Boom! Syrah from Washington State. 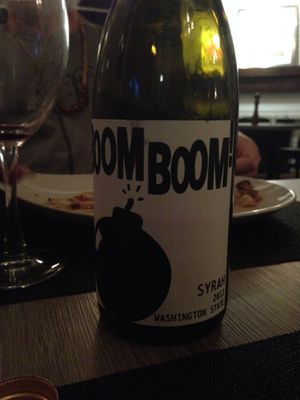 For appetizers, Don went for health food: the Arancini Ball (basically, a ball of deep-fried risotto), filled with Steak and Herb Ricotta Cheese and Marinated Sweet Peppers.  Happily, he lived to tell the tale (even though he ate the whole damned thing!). 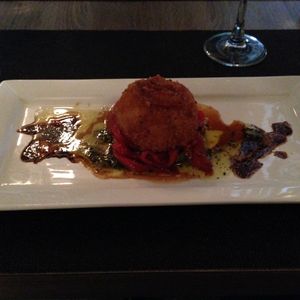 This is how the aliens gain control...

Alyssa decided to take fate in her hands (because she was wearing a new-ish blouse) and have the Parfait of Beets and Melon with Goat Cheese served with Greens.  Happily, her blouse survived as well. 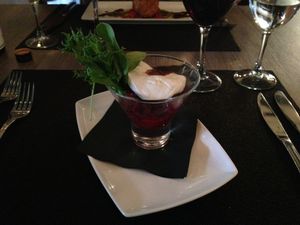 No blouses were harmed in the eating of this Parfait

For mains, Don couldn't resist the Roasted Breast of Chicken with a Zesty Red Pepper Glaze, Boar Sausage and Honey Glazed Sweet Peppers.  It was as good as always (he says, because Alyssa refused to type "perfectly cooked" and "awesome" one more time...  ? 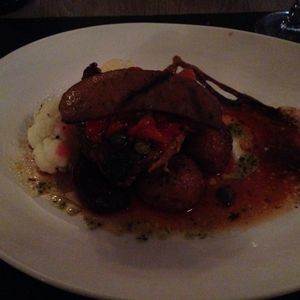 Alyssa had the equally-delicious Risotto with Zucchini and Red Peppers, although it was sadly lacking a phallic sausage adornment.  It was delicious, though, and there's some of it left in the "box of shame" she had to put in the fridge after dinner – which means she gets a snack this afternoon! 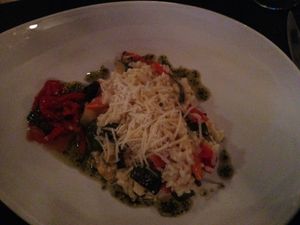 For dessert, Don was excited to get his favourite: strawberries with whipped cream.  And Alyssa enjoyed her favourite Créme Brûlée – although couldn't completely finish that, either.  She gave a taste to he-who-dislikes-créme-brûlée, though, and even he thought it was delicious!

To help us digest, we grabbed a couple of single-malts to take to our room.  We managed to stay awake long enough to finish them, but soon we were snoring again.  These vacations are hard work!

This morning has been grey and rainy, but we don't really mind at all.  We came down to breakfast, where Amy greeted us with a Happy Anniversary (apparently some loose lips have been sinking ships, or something...)  We both went for the bruschetta omelette, which was served with roasted potatoes (tomatoes for Don), toast, peameal (for Don) and strawberries AND raspberries with whipped cream and chocolate drizzle.  Oh my oh my oh my.

So now we're watching the rain from the covered porch, and preparing ourselves to be pampered the rest of the day.  Because you don't have a fifth anniversary every day of the year!