It was a rainy day...  but we didn't mind a bit!  That's what covered porches are for, after all.  After a morning spent with books and view, Alyssa ACTUALLY MANAGED TO SURPRISE Don with his anniversary present (it's been a lot of near-misses over the last couple of weeks, plus she's got a lousy poker face...)  He's been talking about wanting one of these in the living room for months now – Alyssa had taken the photo last week, and he won't see it until we get home tomorrow (plus we still have to figure out how to MacGyver it to the wall, but we've got help with that), but HE WAS SURPRISED and HE WAS HAPPY. 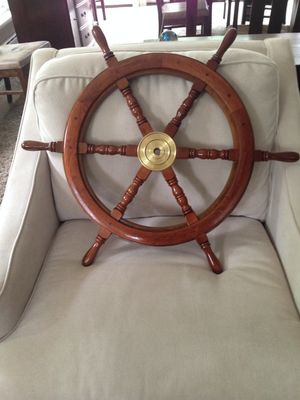 With Don still grinning like a mad fool (he did that a lot all day), we got ourselves ready for our Massagiversaryextravaganza with Cindy and Cheryl.

They were ready for us, with big smiles and "Happy Anniversary" sung to us as well.  We began with the Champagne Mimosa Scrub, in which Cindy and Cheryl donned their exfoliating gloves and scrubbed us down with sugary champagne goodness.  Then they gooped us up, cocooned us in blankets, and gave us head and neck massages while we soaked in all the goop.  We waddled into the shower and rinsed off all the sugary stuff and, ooooh, our skin was so soft and smooth!  Then it was back to the massage tables for getting re-gooped in champagne mimosa lotion (no sugar) and massaged for the remaining hour AND a second hour!  Absolute bliss.  By the time they were done with us, our voices were an octave lower and we couldn't walk in a straight line any more...  We swayed our way up to our room, where we tried to sit up straight, stared off into space, and mumbled from time to time. 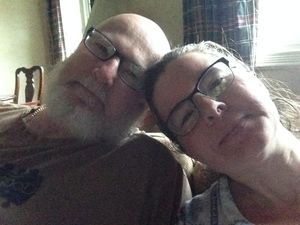 When we were finally able to find our legs again, we wobbled down to grab a beer and see if our pool game had improved.  It had not.  We blame the massage, because neither one of us could hit a darned thing, other than the eight ball.  We gave up after two very long games – which was all well and good, since the bar had some overflow tables set up for dinner, and the early sitting would have started soon anyhow.  We dragged our defeated butts to the living room to read – because that's about all our super-relaxed muscles could handle.

It was Friday, though, and the hordes started to arrive – don't they know the inn is just for us?!?  So we brought a second beer to split in the quiet of our room.

And then it was dinner time.  AH, dinner time...  Not sure if they'd saved it for us, or if we were just incredibly lucky, but we got our favourite table in front of the double doors.  We'd arranged with Deb to open a bottle of Amarone for us at 7:00 for our 8:15 dinner seating – and despite all the chaos of a full house (and short staff), she'd remembered to do it a minute early, and brought it out to the table for us.  We are so spoiled.  ? 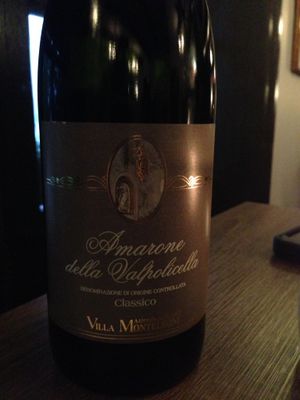 For appetizers, Don continued his duck addiction with the Confited & Smoked Duck Breast, atop a Ricotta Crèpe with Pickled Apples and Calvados Sauce.  His verdict?  The crèpe was delicious – Really Awesome.  ? 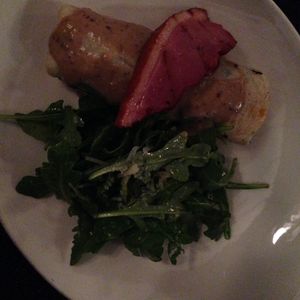 Alyssa went for the Roasted Portabella Mushroom and Poached Tomato Salad, with Arugula and Grana Padano Cheese.  It had a delicious balsamic drizzle, plus a pepper-y topping, and was divine. 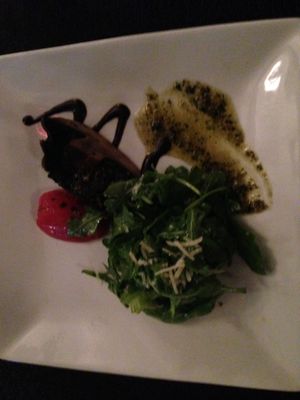 Don opted for the Shrimp & Chorizo Sausage with Penne Pasta in a Light Rosemary Cream Sauce with Grilled Vegetable Ragout.  Again, "awesome" – but when pressed, he says "kinda complicated, in a smokey way" (nice!), "very full-flavoured but not overly rich."  And there were multiple food-coos emanating from his face. 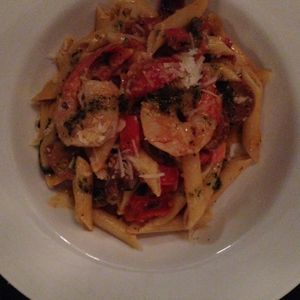 'Shrimp' is obviously a misnomer...

Alyssa had been tempted to have the pasta without the sausage, but (thank you, blessed spaghetti monster!) went for the Pan-Seared Atlantic Salmon with Rainbow Trout in a Lemon & Blueberry Glaze.  Food-cooing turned to food-moaning.  The salmon was like butter.  Only with flavour.  But it melted in the mouth and sent every cell of one's being into blissful rapture.  The trout was wrapped around two gently-steamed-and-still-crunchy-just-the-way-we-like-it asparagus spears – not quite as orgasmic as the salmon, but delicious.  Also some beautifully-cooked beets, heirloom carrots and roasted potatoes.  Alyssa may have warned Deb to keep an eye on her husband (Dave, the chef) when we leave on Sunday...  (Deb didn't seem too worried about this – perhaps she thought we were kidding?)  Ex-freaking-squisite!!!  Two photos are necessary. 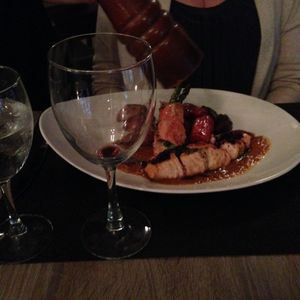 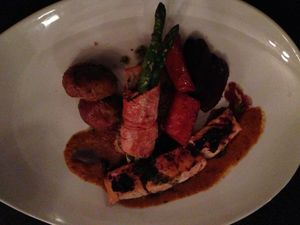 For dessert, Don had the Vanilla Bean Ice Cream with some caramel drizzle, and Alyssa had the Classic Crème Brûlée.  And, as a special anniversary treat, Deb brought us each a glass of champagne – did we mention how spoiled we are?!? 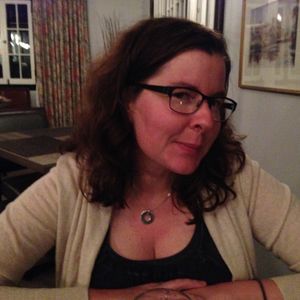 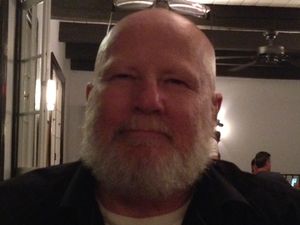 We grabbed a couple of Glenlivets (to help us digest), and retired to our room.

This morning, we were back down with Amy and Aly in the dining room for breakfast – the mass hordes all had departed early for "visit-your-kids-at-camp" day, so we almost had the room to ourselves.  Don opted for the veggie omelette (peameal, etc.), and Alyssa went for the scrambled eggs.  Both lovely.  And now Amy has brought us our second "to-go" coffee on the porch.  It was grey and cloudy when we woke up, but the sun has broken through and it's going to be another beautiful day here on Eagle Lake.